skip to main | skip to sidebar

Let's Call It A Night

Well, kids, I think this is my final post. After yet another set of weeks where I forget to blog, I figure this thing has run it's course.

Makes sense, really. The blog started as a ridiculous way to chronicle my drunken adventures in my mid-20s. Now that I'm into my mid-30s, I'm at a point where waking up with a hangover is just kind of embarrassing...further evidence that no matter how old I get, I can be just as stupid as I ever was.

So, maybe another blog will come along, although even the word "blog" sounds so last decade at this point. If I ever get the feeling that you guys are dying to hear about my interior decorating plans or how my herb/vegetable garden is going, I may return.

Until then, thanks to the handful of people who still read this nonsense (or at least get automated updates via their RSS readers or something), it's been fun, and it may even serve as the basis for some shitty autobiography I write one day.

Out of curiosity, I decided to download a recommended app to help track my spending. I'm not really a believer in budgets (I'm surprisingly sensible with my money, assuming you agree that having no credit card debt is basically the only requirement here), but figured it couldn't hurt to check where all my money is going.

And so, excluding my mortgage and my monthly savings, here's where my disposable income has gone in the last two months: 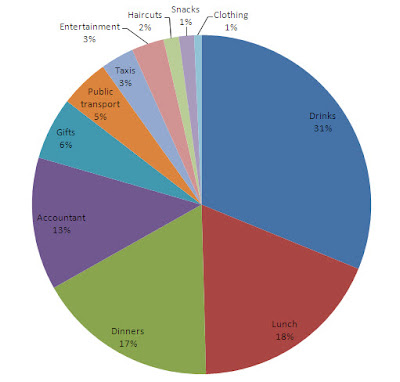 I suppose this shouldn't be much of a surprise from someone whose blog is about how he used to get blindingly drunk on a regular basis, but apparently even now almost a third of my disposable income goes simply to 'Drinks'. Factor in the possibility that a lot of what has been labeled 'Dinner' and 'Lunch' is probably booze, and it's almost enough to make me want to take some time off drinking. Almost.

I nearly felt better about being able to dismiss the Accountant and Gift amounts since those wouldn't normally appear, and then realized that it would mean I had spent an even larger percentage of my income on booze in the same time period. At some point, it just gets embarrassing.

Not sure tracking my expenses has really made me rethink the way I spend my money, but at least we can all have a good laugh at what a moron I am, amirite??
Posted by Zander at Wednesday, March 27, 2013 No comments:

Lately, Hickster and I have been debating whether it is preferable to hide someone annoying on your Facebook feed or to simply delete them.

On one hand, hiding them is almost a cowardly and passive-aggressive way of dealing with someone in your life (or at least your online life) that you don't really like but don't want to upset.

Having said that, deleting someone seems pretty harsh (and possible to stir up awkward moments or tension in real life) when you can just pretend they don't exist by hiding them.

Well, today, someone I'm friends with on Facebook posted the lyrics of an entire song ("Halo" by Beyonce) into his Facebook status and dedicated it to their relatively new boyfriend. Even more irritating were the people who commented to say that it was sweet. I was tempted to comment and point out that it's usually the people who post such drivel publicly that end up having the most humiliating breakups months later, but I refrained.

I hid him, and the decision process was very clear. I don't want to see his Facebook updates, but I definitely want to be invited to any cool parties he throws in the near future.
Posted by Zander at Thursday, February 28, 2013 No comments:

Labels: why do you exist

Coming from a rather progressive and international family, I'm often just amused at stories from friends about crazy conservative relations who spew all sorts of intolerant crap at family get togethers. I've always wondered what it's like to have to deal with people like that despite the fact that you are poles apart on almost any issue of the day.

Well, I wonder no longer. For the last few years I've been catching up occasionally with a family friend here in Sydney. Keep in mind that she used to be as progressive and international as my family, however in her later years has turned into a raging conservative who is appalled to anything resembling change.

We recently caught up for a meal, and the highlights low lights of the conversation from her end included:

We debated all of these things, and I tried to find a halfway point acknowledging that maybe some people from each culture may be a certain way, but to characterize them all that way is unfair and rather ridiculous. She didn't necessarily agree.

In any case, she's only getting older and more scared of the changing world, so if nothing else I will probably keep getting together with her once in a while in order to bring you the worst of her offensive rants. At the very least we can try to remember that apparently right wing rage can happen to anyone.
Posted by Zander at Saturday, February 16, 2013 No comments:

Labels: silly australians, why do you exist

For the last week I have been dog sitting for my friends who have gone overseas (and had a surprise wedding in Hong Kong, but that's besides the point) as a bit of a trial. Even though I'm relatively sure I don't want to get a dog anytime soon, I occasionally wonder if I should. "Maybe it's not that hard" I've thought. "Maybe it's hard work but it's worth it!"

In one week these dogs have used my balcony (and one time my livingroom carpet) as their personal toilet, they've chewed on anything they can get their teeth on (what is up with the shoe obsession??), and I came home yesterday to find they had gotten into one of the potted plants in order to chuck half the soil onto the balcony floor and tear off a few palm leaves. Fantastic. 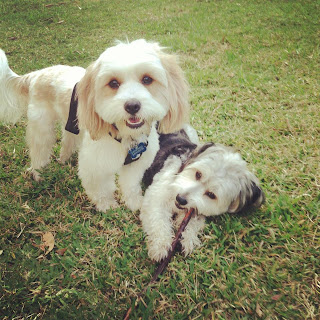 Don't get me wrong, these guys are adorable (see photo) which is pretty much the only reason they're still alive, and makes me wonder how so many ugly dogs have managed to survive in society for so long.

More importantly, I'm perplexed at the thought that anyone with a social life would get a dog. If I was a loser without much to do on nights and weekends (see also: being old) then I would totally get one. Not like I'd have anything better to do. But WHY would people in their twenties or thirties who don't have children yet even bother? It's hard work, and let's face it, these guys are not gonna get much smarter.

In any case, the dogs are gone, my apartment is almost clean again, and I think it's well established that I may have to wait until retirement (or until I get fat and all my friends disown me, probably another three years) before I get a dog of my own. The only other way I'm getting a dog is if I win the lottery and can afford to fly Cesar Milan down to train them for me. I won't rule that out.
Posted by Zander at Tuesday, February 12, 2013 No comments:

Labels: why do you exist

At the risk of sounding morbid, I have often thought what I'd want my funeral to be like. And things get outta hand pretty quickly. Maybe this is because I've never actually been to a funeral of any sort in my lifetime, but I don't see any reason they can't be something of a lighthearted occasion.

My top two funeral concepts at the moment are:

These are just the top two ideas right now, other suggestions are welcome!
Posted by Zander at Tuesday, February 05, 2013 No comments:

Around the World in 30 Years

At least once a year I tend to look at my 'travel map' to see where I've been and look for inspiration on where to go next. I was avoiding work this afternoon and took another crack at it: 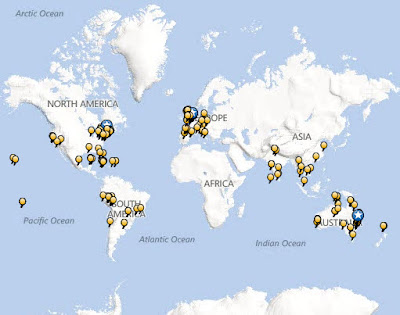 It actually hasn't changed too much in the last year, partially because of all my horrible, selfish friends who got married in the US last year, forcing me to make three separate trips over there. As a result, the only new country I got to visit was Mexico, which was awesome but as an American doesn't feel particularly exotic.

My next trip this year is going to be 12 days or so traveling around Japan, followed by a week in the Philippines laying around on island beaches and a couple of nights in Manila visiting friends. If my travel map is to be believed, that will bring the number of countries I've visited to 30.

Unfortunately, I'm reaching a point where I've visited almost all the places that I've desperately wanted to see, and now I'm hitting up place that just sound kinda cool or nice based on what I've heard recently. As you can see from my map, I still have to visit Africa (amazing how expensive it can be to visit a continent full of poverty-stricken people) and I haven't yet touched the Middle East, which will definitely be added to the agenda once everyone stops blowing shit up over there.

I suppose I'm curious about Iceland and even Greenland because every time I look it up on a map all I can think is 'WTF?' After that, maybe I will settle into a routine of using all my time off to visit family and friends in NYC and Europe, with the occasional week at a villa in Bali (don't worry, I'm tempted to punch myself in the face after typing that sentence out) but it does feel just a little like my obsession with travel that I had when I was younger is fading just a little. Which is probably for the best, because I am old and have a mortgage and oh my god I'm going to stop right now before I decide to kill myself or decide to at least write a letter of apology to my younger self who I'm sure had much higher hopes for us.
Posted by Zander at Thursday, January 31, 2013 1 comment:

WHAT TO READ WHEN I'M TOO LAZY TO BLOG